As the NFL celebrates its ninth season of football in the United Kingdom, many fans may not recall its plans of initiating games in China during the same period. In 2007, the NFL scrapped a preseason game in China, but that has not halted the football’s growth in the market. Since 2013, interest in the NFL among the Chinese population has jumped from 1.7 to 7.9 percent — contributing an extra 31 million people to its fan base.

Flash forward to 2015 and the University of Illinois, along with other NCAA universities, is paying heed to the global trends that have affected the sport. As a result, Illinois Athletics and the Fighting Illini Radio Network, led by Fighting Illini Sports Properties, announced during preseason that home football games at Memorial Stadium would be broadcasted in Mandarin Chinese online through FIGHTINGILLINI.COM.

Accordingly, David He and Bruce Lu, two Chinese students at the University of Illinois, have called every home game in Mandarin to increase interest in football among Chinese students. 44,000 audio streams of the games in Mandarin are an effort to help those Illini students feel greater connection to the university. During the broadcasts, Lu introduces the game, makes play-by-play calls and commentary, and he adds the color commentary. Check out the video footage, here. The pair has even facilitated Q&A sessions through its online forum.

“It’s both fun and challenging,” Lu says. “Without video stream, it’s really hard for them to understand what we’re talking about. Friends ask me tons of questions about it. The issue is that they have never been exposed to football before. A brand new thing is hard to pick up.”
Lu and He were recruited based on their involvement with the Chinese Student and Scholar Association at Illinois. 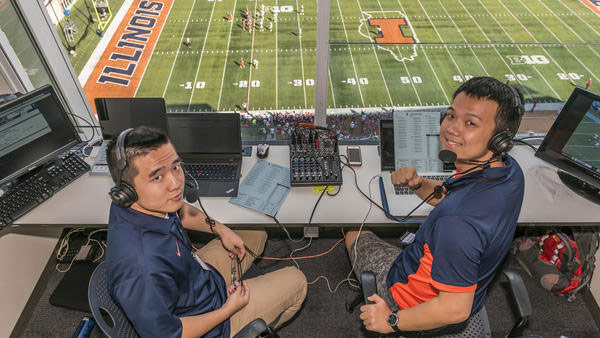 “For the last three years we’ve done these ‘Football 101’ clinics that have been targeted toward our international students here on campus,” says Mike Waddell, Senior Associate Director of Athletics at the University of Illinois, who invented the concept. “As we were looking at that and talking about different ways that we can engage, one of the things that popped into my mind, being a former radio broadcaster, is what if we did the home football games in Chinese?”

Illinois’ Chinese student population has risen to 5,295, comprising half of the school’s total international population and 12% of the total student body population. The number of Chinese students attending Illinois has gradually increased from 850 students in 2005 to more than six times that number at present.

“We want to be the Big Ten team of Asia,” said Brad Wurthman, Associate Athletic Director of Marketing and Fan Development. “So that’s a first step for us.”

He and Lu said their families and friends in China listen to their broadcast of the games. The first game the duo broadcast in Mandarin was Illinois vs. Kent State University on Sept. 5th.

Illinois spends approximately $300 on every broadcast in order to pay He and Lu, and to cover the technical costs of broadcasting online. “We felt like this was a low-risk, high-reward type of opportunity to extend our already substantial outreach to our international students,” Waddell says. “We went with the Web because it’s very economical and it also has a reach that is unlimited.”

“What I hope is that other schools will see what we’re doing with our international students and using sports as a bridge to engage those students more into the culture of what’s going on around their campus and if they see that as a viable option for them it could be in any language,” says Waddell. “For us it just tends to work in Chinese.”

David He agrees with Waddell’s sentiments, “The culture thing makes it feel like this is not a thing for us. But we always have the excitement inside of us. The challenge is (creating) the motivation to get you here (to a game). Once you get here, you will love it.”