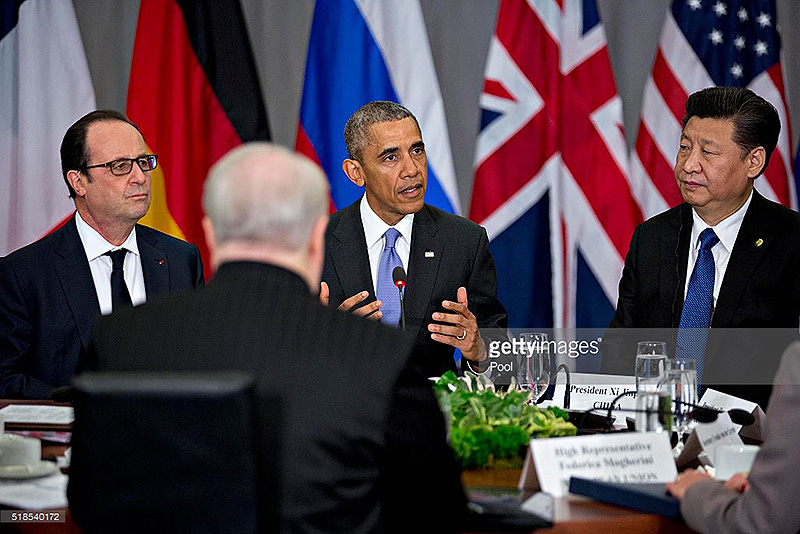 One promising development in recent years has been the growing China-U.S. cooperation against nuclear terrorism. This new partnership represents a welcome development to the international nuclear security regime, which is challenged by sectarian hatred, revolutionary technologies, and frigid Russian-U.S. relations. The end of the nuclear security summits and major Russia-U.S. security tensions require improved and more frequent China-U.S. cooperation to compensate for these setbacks. China-U.S. cooperation in this field also represents a most successful dimension of Sino-American security collaboration, against a backdrop of many disputes and tensions.

Xi Jinping and Barack Obama continued to develop this partnership when they met multiple times, bilaterally and in group sessions, at the March 31-April 1, 2016 Nuclear Security Summit in Washington. Since President Obama launched the nuclear security summits in 2010, he has seen China’s help as indispensable. In turn, a high-level Chinese team, led by the president, has attended all four summits and contributed helpful support and ideas for augmenting safeguards against nuclear terrorism.

In their “U.S.-China Joint Statement on Nuclear Security Cooperation,” issued at the recent summit, the two governments made a “commitment to working together to foster a peaceful and stable international environment by reducing the threat of nuclear terrorism and striving for a more inclusive, coordinated, sustainable and robust global nuclear security architecture for the common benefit and security of all.”

Several factors have driven this China-U.S. partnership: the transformation of the terrorist threat confronting both countries, which has become more militant and nihilistic; the stake both states have in protecting global commerce; and the strong commitment by both governments to expand the use of nuclear power at home and internationally.

Furthermore, enhanced nuclear security offers opportunities for the kinds of “win-win” solutions that China strives for. Everyone would suffer from a major nuclear terrorist incident wherever it occurred. When President Xi attended his first Nuclear Security Summit in 2014 at The Hague, he recognized that collective global nuclear security was only as strong as its weakest link: “The amount of water a bucket can hold is determined by its shortest plank. The loss of nuclear material in one country can be a threat to the whole world.”

In this area, moreover, Beijing has had an opportunity to become a regime-maker rather than a regime-taker. In the international economy, the UN system, and even in the WMD nonproliferation domain, China has had to accept the existing rules of the game to become a major player–changing its policies to adhere to preexisting institutions and treaties designed by others. But in the relatively new field of countering nuclear terrorism, China can join as an equal partner to build a system of rules and procedures to benefit itself as well as others.

There are of course differences between the two countries’ approaches to nuclear terrorism beyond their mutual opposition to it. The Chinese government is less concerned with limiting the spread of uranium enrichment technologies to new countries, supports the reprocessing of spent plutonium (though not in Japan) into new nuclear fuel despite the proliferation risks, and sees the United States as overly concerned with combating the symptoms of nuclear proliferation and nuclear terrorism while ignoring its root causes (which some Chinese describe as U.S. threats and an inequitable U.S.-led international order).

Fortunately, in practice the two countries have focused on pragmatic measures to advance nuclear security. China and the United States depend on international trade for their prosperity, so have been cooperating to counter nuclear and radiological trafficking through Chinese ports. Through the Container Security Initiative, the Megaports Initiative, and joint training of customs officers, the two countries pool their resources to deter, detect and interdict nuclear smuggling. With U.S. encouragement, China has developed a multi-tiered system of export controls built in ministerial decrees, state regulations, company compliance programs, and national laws and international treaties.

This February, China and the United States held their first round of dedicated bilateral talks devoted to nuclear security. In Washington, they joined other nations in pledging to pursue measurable improvements in nuclear security even in the absence of further presidential summits.

The vector of their future cooperation in this domain was evident in the China-U.S. construction of a joint Center of Excellence (COE) on Nuclear Security in a suburb of Beijing. This complex, the largest such center in East Asia, is run by the Chinese government but will include U.S.-provided equipment. It can train up to 2,000 scientists and technicians annually in technologies and practices for protecting nuclear materials and facilities.
Another area for further improvement lies in enhancing the safety and security of nuclear energy production. A major problem with such technology is that it can be misused to make nuclear weapons. China and the United States are cooperating to convert research reactors from using highly enrichment uranium (HEU) fuel to employing low-enrichment uranium (LEU) fuel, which is harder to make into a nuclear weapon. China is prepared, with U.S. and other international assistance, to help other countries, such as Ghana and Nigeria, to convert their Chinese-made research reactors from HEU to LEU.

Due to distrust and past problems, it is unlikely that China-U.S. cooperation will extend soon to include resumed laboratory-to-laboratory cooperation or the military sector, even if most fissile materials fall under military control. But China can play a critical leadership role in the Global Initiative to Combat Nuclear Terrorism, the Global Partnership Against the Spread of Weapons of Mass Destruction, the United Nations and other international institutions weakened by Russian-U.S. differences. The last nuclear security summit issued actions plans for how these institutions might make major contributions to nuclear security in coming years.