More than twenty-one hundred years ago, Zhang Qian, an outstanding envoy and explorer of the Han Dynasty, mapped a trail from Central China to the far Western Regions of Central Asia and Xinjiang. At the time, the trail served mainly diplomatic purposes, allowing for the Han Dynasty to form strategic alliances against northern invaders and expand the reach of the Han Chinese. The routes, however, would soon mark the starting point of what the world would come to call the Great Silk Road, a remarkable trade network that began in modern-day Xi’An and spanned as far as Valencia, Spain. Over the centuries, merchants, pilgrims, soldiers, nomads, and urban dwellers from around the world would travel along these routes to carve out new empires and the resources within.

China, the first country to blaze trails connecting the East to the West, is once again setting off on a campaign to connect Eurasia by way of a new Silk Road. Announced in 2013 by President Xi Jinping, the Chinese government plans to launch the Asian Infrastructure Investment Bank (AIIB) and bankroll billions of dollars’ worth of infrastructure projects and maritime channels throughout Eurasia. Also known as the “One Belt One Corridor Plan,” the proposal would create two strategic trading routes, the Silk Road Economic Belt and the 21st Century Maritime Silk Road. The AIIB has already successfully launched, enrolling 52 participating countries, including leading European economies and Southeast Asian neighbors, and intends to register more than $100 billion dollars due to an influx of applicants. 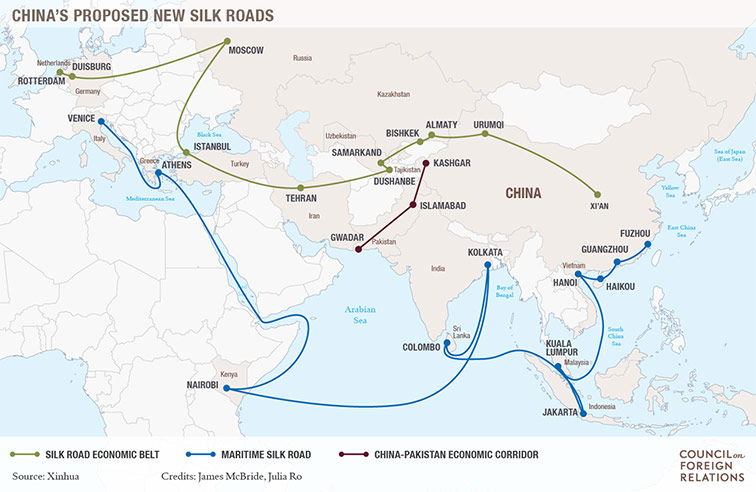 The modern-day Silk Road network would enhance Eurasian and African economies by providing trade, investment, and capital to applicant countries. If successful, the plan expects to one day connect 65 countries, 4.4 billion people, or 63% of the global population—the world’s economic core—and turn the region into a new center of economic trade. While countries along the Modern Silk Road currently account for only 29% of world output, experts say that within 10 years, the trade relationships along these routes will, for some, double.

The project may indeed allow China to regain its status as the “Middle Kingdom” as the outcome will put China at the center of a freight system currently dominated by European shipping lanes. With the so-called “US pivot to Asia” set in the backdrop, President Xi sends a clear message that the country will work through trade and diplomacy to rebalance China’s place in global economy.

Although there has been no official US response to the plan, new trade routs may weaken the US’s grip on transatlantic and pacific shipping lanes important to security and America’s maritime control. This may also secure China’s position in international affairs and equal their footing with the United States in the international economy. The plan would also create a community less dependent on the US dollar and improve representation of developing nations in global affairs.

The New Silk Road serves as yet another example of a major economic development easing the barriers for international business and trade. The importance for the world’s next generation of leaders to have a more global perspective and understanding of not only their own countries place in the global market, but also the customs and practices of many nations, continues to increase in relevance and practical application in today’s global environment.