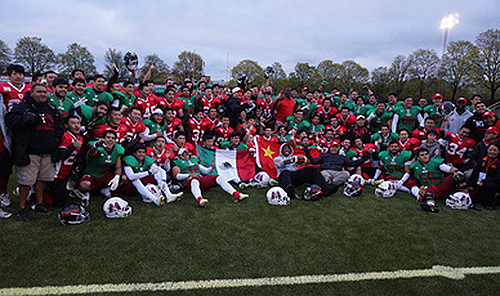 The International Federation of American Football (IFAF) has announced that it will hold the 2016 World U19 Championships in Harbin, China. The event marks the first-ever international american football tournament to reach China’s shores and an opportunity that many local shareholders expect will build momentum for the sport.

IFAF is recognized by the International Olympic Committee as the global organizing body for american football. The organization unites seventy-one countries on six continents every two years to be a part of their World Championship Games. The games are the most significant football event for the 15-year old organization because it serves to increase awareness and understanding of the sports to millions of fans, both old and new. More than 40,000 fans attended the three game days during their last competition in the United States and the event is expected to keep growing.

Andy Fuller, Managing Director of IFAF, said: “We are thrilled to be hosting the U19 World Championships in China in 2016. The Championships will shine a light on the fantastic work being undertaken by a range of stakeholders in China to develop football and the nation’s hosting of a major event, such as the u19 World Championship, will serve to provide an incredible inspiration to so many.”

The American Football Union (AFU) and local partners at Harbin University of Commerce will coordinate the games. AFU develops football at eight Chinese universities and has attended recent years’ IFAF events with the team. Interestingly, Ricky Williams (ex-NFL RB) came to China two years ago to help China’s team prepare for the 2013 Sweden U19 Championship Games.

Local football organizers in China believe that this may be the opportunity they have been waiting for to attract government interest in supporting the national development of the sport overall.

Click here to learn more about IFAF and the 2016 event.