Far From Sunday’s Super Bowl, A Football Championship In China

Far From Sunday’s Super Bowl, A Football Championship In China 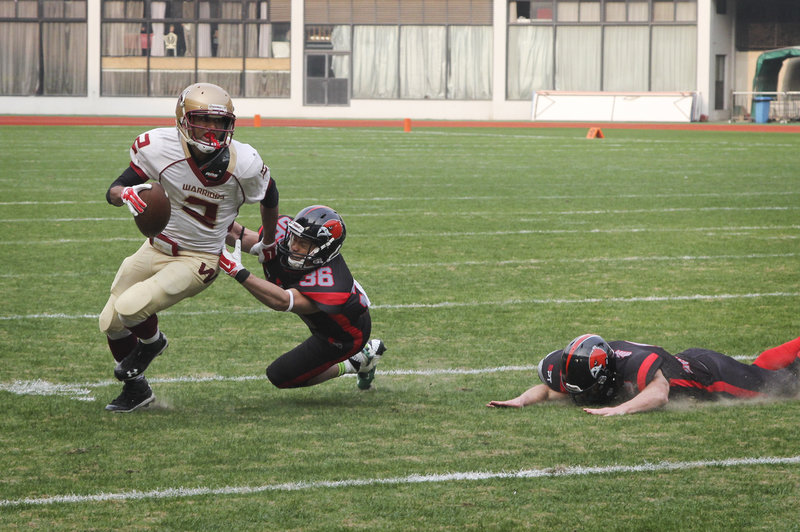 Football has practically no history in China. Some of China’s most popular sports are individual ones that don’t involve physical contact, like pingpong and badminton. Chinese players say football provides an opportunity to release their aggression. – Frank Langfitt/NPR

It’s halftime and the Warriors are leading the Nighthawks by a touchdown in the championship football game. Inside the locker room, wide receiver Chris Gardner from Minnesota urges everyone to stay cool.

“Do not sink to their level,” Gardner says of the Warriors’ crosstown rival. “They are losing. They are angry.”

“They’ve got more injured players,” says Owen Yan, the Warriors’ 6-foot-3 defensive end. “They are more nervous than we are. Don’t let them provoke you.”

This sort of scene plays out every year in thousands of stadiums across America. But this isn’t America. It’s Shanghai. And Yan is speaking Mandarin, translating for his teammates, most of whom are Chinese.

The Nighthawks and the Warriors are part of the American Football League of China, a fledgling group of 10 grass-roots teams that have been playing for three seasons in a country with practically no history of the sport. Like pro teams in the United States, some here have colorful names, such as the Combat Orcas and the Chengdu Pandamen.

The players, all of whom have day jobs, learned about football by watching Hollywood movies, such as Adam Sandler’s The Waterboy, as well as NFL games online.

When Yan, a 32-year-old pharmaceutical salesman, first saw football videos, it was a revelation.

Some of China’s most popular sports are individual ones that don’t involve physical contact, like pingpong and badminton. Chinese players say football provides an opportunity to release their aggression.

“My favorite, 75, Deacon Jones,” he says, brimming with admiration. 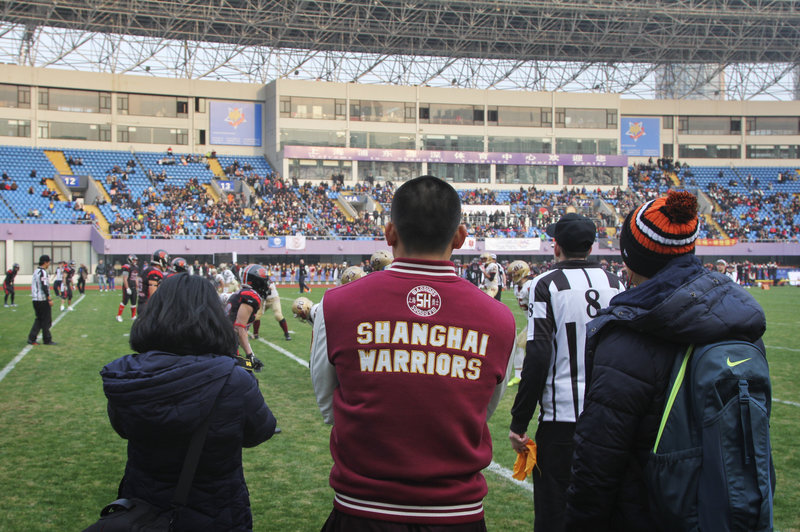 More than 3,000 fans turned out for the Shanghai championship game of the American Football League of China last month. The fledgling league of homegrown teams just finished its third season. – Frank Langfitt/NPR

Deacon Jones was one of the great NFL defensive players of the 1960s and 1970s. He played for the the Los Angeles Rams, San Diego Chargers and Washington Redskins. He also coined the term “sack” — as in leveling a quarterback. When an American friend showed Yan videos of Jones in his prime, he thought, “This old guy was amazing.”

That a Shanghai salesman is trying to model himself after an African-American Hall of Famer is a measure of globalization these days, as well as a sign of the increasing freedom Chinese have to define themselves in what not so long ago was a very conformist society.

Yan’s parents have flown in for today’s game from Chengdu, a city more than 1,200 miles away in southwest China. When he first told his folks he was playing football, they naturally worried.

“At the beginning, they felt this is dangerous, ‘Don’t hurt yourself,’ ” Yan recalls as he walks back to the field for the second half. “But after the first time they watched the game, ‘Just go, boy! Just go! Keep fighting.’ ”

Not all players who come out for football teams here are as dedicated as Yan. Vladimir Emilien, a former safety at the University of Michigan, coached the Beijing Iron Brothers this season. Emilien, who came here on a fellowship that combines coaching and business internships, says some players joined his football team just to stand out from mainstream Chinese society and buff their image on WeChat, China’s biggest social media platform.

“I had the positive guys who are very interested, but there are guys there who would possibly come just to try to take pictures and just to show it off,” he says, roaming the sidelines of today’s game in a hoodie and shorts. “They weren’t interested in playing. They were just interested in the social media aspect of the game.” 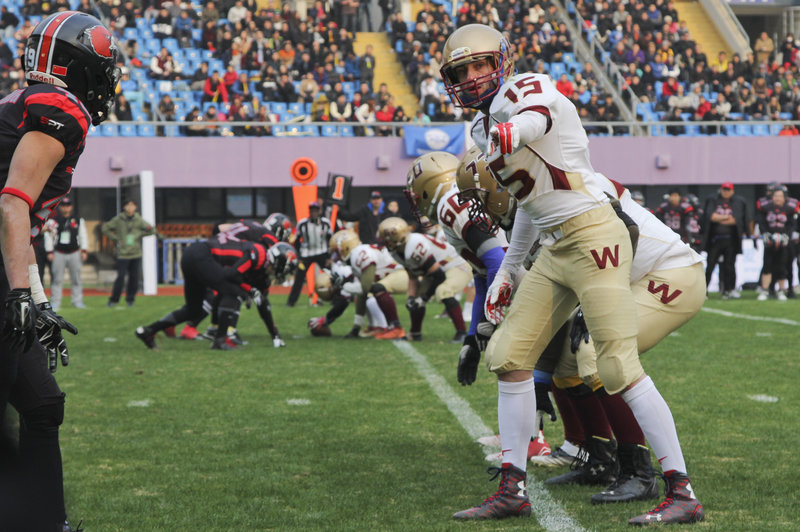 All the teams in the American Football League of China are majority Chinese. Some teams, like the Shanghai Warriors (wearing white) and Shanghai Nighthawks (wearing black), have conventional names. Others have more colorful names, such as the Combat Orcas and the Chengdu Pandamen. – Frank Langfitt/NPR

Of the more than 3,000 fans who have come out to watch on this smoggy afternoon, not all are sold on the sport. A civil servant named Zhang has brought his 5-year-old son, Ziyan, who has been reluctant to try the game.

“Most kids in China are single children, so they resist team sports or sports that are physical and aggressive,” says Zhang. “When we went to the first football class, he didn’t even want to experience it with other kids.”

Zhang doesn’t expect football to catch on here, because it doesn’t fit the Chinese temperament. Football, he says, emphasizes physical force in a sports culture that puts more emphasis on skill and finesse. But, Zhang says, the game could help toughen up Chinese boys.

“Today’s boys aren’t manly,” says Zhang. “They should have a pioneering spirit and drive.”

It’s now late in the fourth quarter and time is running down in an exciting game that has featured breakaway runs and big pass plays. The Warriors are up by a touchdown. The Nighthawks have the ball in their own territory.

As the final seconds tick away, the Nighthawks’ quarterback launches a Hail Mary — right into the hands of a Warrior defender, who runs it back nearly 50 yards before being tackled. It’s an appropriate finish to a wild game.

Yan, the Warriors defensive end, rushes to the end zone with his teammates. They fall onto their backs and soak in the victory. After three seasons, the Warriors are league champs.