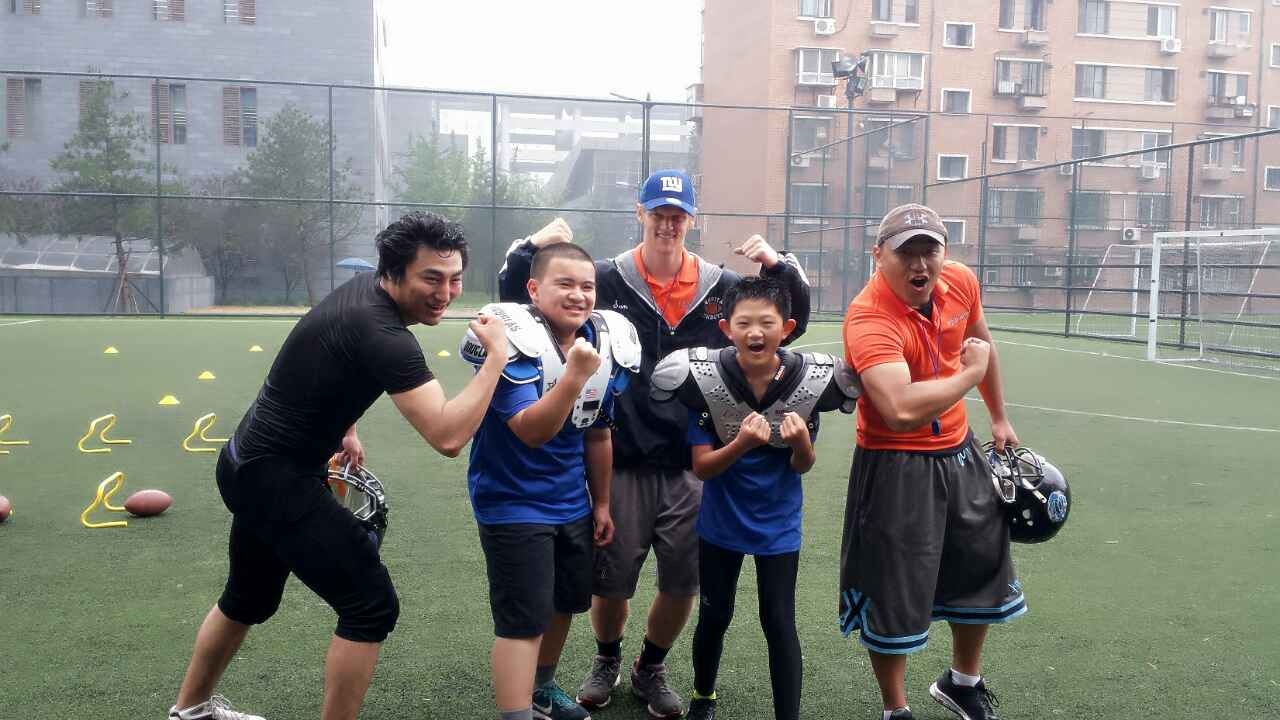 My name is Sam Stuart and I am a 2013 graduate of Lafayette College and a former collegiate football player in the Patriot League. I am writing today because my experience in China the past year has undoubtedly changed my life for the better in large part due of my participation in coaching American football in Beijing. I came to China with a personal interest in learning Chinese so I studied hard at Tsinghua University, lived with a beautiful and caring Chinese family, and immersed myself as much as possible in the culture that was both foreign and fascinating to me. Because of everything China gave to me during my stay I wanted to genuinely give back so I figured why not help introduce an element of American culture to China that is very near and dear to my heart…American Football. During my time both on and off the field I made life-long friendships, gained a deeper and more intimate understanding of the Chinese culture, learned a new language, and gained invaluable coaching and professional experience that I could never have accumulated coaching in the United States. I became a head coach in my first year, and learned how dedicated, thorough and thoughtful a coach must be in order to engage and instruct athletes, especially when coaching athletes who are new to the sport and do not speak your native language.

However, in order to keep the momentum going three issues must be addressed in order for American football to flourish in China:

1. The lack of quality equipment

2. The economic difficulty for many players to travel for league games

3. A lack of quality/passionate coaches

I was the only coach of my team, the Beijing Cyclones, for the 2013 season and they unfortunately missed out on a good deal of guidance, logistical support, and training due a proper coaching staff not being in place. For example, we had over 50 passionate players on our roster who genuinely wanted to learn and get better plus new guys trying out every week but the only thing holding both our team and the league back from quality expansion was a lack of dedicated coaches with ability to both start new and build existing teams. The importance of developing and obtaining quality coaches creates a vital cultural bridge that no diplomat could ever achieve in a suit and tie. Out on the gridiron in Beijing every week I was constantly photographed, interviewed, and asked about this interesting and different new sport that many young Chinese seem to be gravitating towards. Many Chinese people want to genuinely understand American culture, and football is an important link towards achieving that goal. This grass roots level cultural exchange is a brilliant and mutual beneficial bridge that could make an immense impact on every social level for the foreseeable future.

Unfortunately, when I was coaching I did not have a stipend when I moved to China so I was limited in my availability to properly coach my team. I did not have the money to rent my own apartment, so I was extremely blessed to have a generous host family invite me into their home as one of their own. A stipend would allow guys like myself to dedicate more time and energy to promote a sport that we love in a country we have grown to and most importantly help with others’ learn to be better men though the wonderful sport of American Football.

As you may know, the popularity of football in China is skyrocketing. Because of that I was able to help co-found a youth football team in Beijing and have been told that this team could never have started without me because Chinese parents were only willing to let their children play the sport when they became aware that a quality, credible, American coach with experience was going to be overseeing and instructing their children. Only then was the youth league able to take off. Point being, both our presence and passion have directly led to the creation of American football leagues across China and with the popularity of the sport growing at a rapid pace we need more coaches to ensure that the sport is able to reach as many people as possible in the worlds most populous country.

I cannot tell you what I will be doing down the line with my professional career, but I do know that my experience coaching football in China has broadened my horizons and given me a global perspective. I’m very excited to be a part of the improving relationship between Chinese and American people in the years to come and I am honored to see this all develop in conjunction with passionate and honorable individuals like Chris McLaurin and Zach Brown. I truly feel that the sky is the limit, and in a few years we may even see Chinese guys playing in the NFL while bringing their Chinese culture to America.