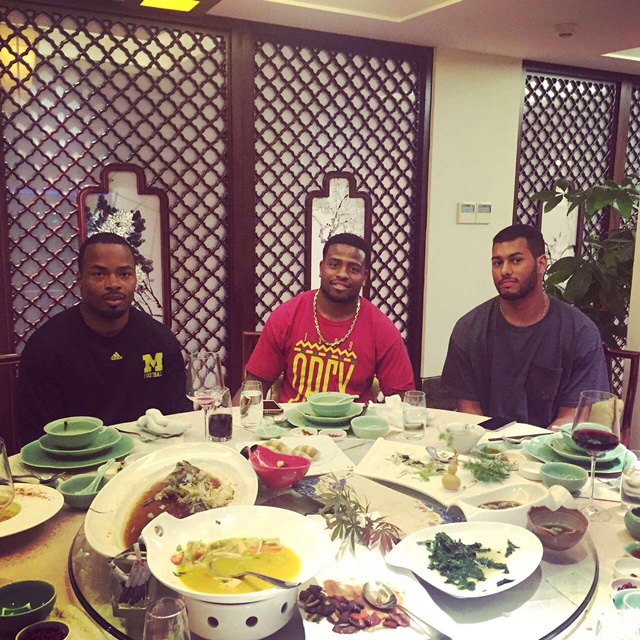 It is hard to believe how quickly the past 9 months have gone by. Huge congratulations go out to our first fellowship class, as Darien, Floyd, and Vlad’s China Fellowship has come to a closing. The whole GLF staff could not be more proud of what these young men have accomplished over the past 9 months in China, and the impressions they have made on their local communities are sure to last for a lifetime.

On April 30th GLF held the China Fellowship Wrap-up in beautiful Hangzhou over the Labor Day holiday weekend in China. Having completed their professional placements 2-weeks earlier, fellows had time in each of their placement cities for final handovers in their work, football teams, and farewell’s to the close communities they had built over the past 9-months.

In Hangzhou each fellow had prepared a 1-hour presentation for GLF executives highlighting their experiences over the past 9-months. It was quickly evident that while each fellow certainly had some similar experiences, the most impactful aspect for each fellow was quite different. While we cannot truly encompass it all here, GLF has prepared a “top memories” from each fellow:

1. Being in a Chinese movie
This was something that happened completely by accident but who knows maybe it leads to an acting career…but more realistically probably not. I think this incident speaks to the amount of opportunities here compared to the States. Granted this was specifically for film but I think it services as somewhat of a representation to the other opportunities here…well at least if you’re a foreigner.

2. Playing basketball with locals
This was something I mentioned in a previous blog but this is still some of my favorite experiences living in China. Although I am not the best shooter this was an excellent time to have interactions with locals and help reduce some stereotypes.

“However after a few games and seeing my low shooting percentage I can’t help but feel like I broke some stereotypes (that’s what I’m here for right?).” – Darien Bryant (Bridging the Gap)

3. Migration of Chinese New Year
China was an adjustment for various reasons but living most of my life in relatively small cities the large population was a big one. This was compounded during Chinese New Year, a shocking statistic from this year’s holiday is around 2.5 billion trips on the road were expected to be taken, along with 332 million trips by train and 55 million through the air. This type of congestion led to many delays and some logistical issues.

4. New Year’s Eve in Hong Kong
As maybe most Americans do, I associate the New Year celebration with New York because I often saw the ball dropping in Times Square on television so I became interested in having the celebration in a big city.

5. Touring Factories
Most people in the States often think of child labor and the many other jokes that come with Chinese factories. The environments I observed for most of these workers is not something that I personal would enjoy living in but I believe would not align with most Americans perceptions. Since these factories are spread out and specialize in various products I was able to visit Chinese cities that many people would have no other reason to visit such as Ningbo, Taizhou and Fuzhou.

Although these factories did not fit the common joke among Americans I couldn’t help but wonder:

6. Coaching in 3 languages
With this being my first time officially having a coaching position, there has been many challenges that occur like any other learning curve. I studied a bit of Mandarin during my time at University, but now, living in Guangdong province, I’ve begun to learn some Cantonese. Although my team is comprised mostly of Chinese players, we have one Russian player who I often speak with in English. I mostly speak Cantonese for the locals and Mandarin for the few Chinese we have from other provinces. The switching between languages is something that constantly keeps me on my toes.

7. Player Development
Almost everyone is surprised when I tell him or her that I coach American Football in China, which is understandable. The question that often follows after what I do here is…are they any good? Although we haven’t reached SEC caliber athletics, I have been pleased and excited with the level of growth and appreciation from my players in Guangzhou. Our recent annual party is something that made me reflect on the growth that not only our team is having but the individuals as well.

These last 3 could possibly be listed as one but I’ve decided to separate them to show a representation as to how much of an impact these types of experiences have had on my time living in China.

8. Meeting diverse people
My time here has introduced me to such a diverse group of people, not just foreigners but also various types of Chinese, old, young, Cantonese, and those from other parts of China. A growing theme from my blog is that more people should travel abroad whether it is for work, study abroad, or even vacation. If I had to pick one reason to travel abroad meeting diverse people would be it. Meeting these people helped me become more understanding and then allowed me to share this new information and perspective with others. Part of the reason I’m writing this blog is to give people the ability to experience what I have, along with attempting to inspire them to travel. Meeting people from all over the world and hearing their life stories about how they ended up in China is only a bonus.

9. Befriending a local Chinese family
Meeting this family happened completely by chance, which is something I’m very grateful for because it introduced me into some of the intricacies of Chinese culture on a more personal level. It allowed me to become friends with a man over the love of drums. He then introduced me to even more people, family, and friends.

10. Learning Chinese culture
Those that have traveled around China might understand the many differences within the country. There are so many complexities within the country, for example asking if someone speaks “Chinese” as opposed to speaking Mandarin or Cantonese? The differences among the provinces in China and their unique cultures and language has been quite interesting to experience first hand.

1. Of course every province in China has its popular cuisine. Along with being placed in Sichuan I was able to experience first hand the unique style of select Sichuan style dishes. One to remember is the infamous Pig Brain. It’s spicy and it’s pig brain.

2. As a foreigner, you develop relationships with the organizations you are apart of very quickly. Most members proudly parade you around and as a result you receive unique opportunities that allow you and the organization to gain good exposure in the community. I was interviewed twice by local news stations and was able to show why and what exactly I was doing here.

3. Chengdu is one of many places in China that is both traditional but modernized as well. Unlike a lot of other places in China, Chengdu has managed to hold on to some of the more historical areas. I’ve been able to visit some of these traditional places, monasteries, temples, etc and some of them are right within walking distance of my home.

4. My football team is not only improving organizationally but also extending a helping hand to develop younger players who have started some of their own American football teams at the collegiate level.

6. I’ve started to gain an interest in martial arts. I study Brazilian Jiu Jitsu and Muay Thai during the evenings. Past midnight I’m in a fight club and I pay people to beat me up. Haha

7. I visited southwest Sichuan and climbed a mountain called LuShan. I discovered a new breed of Monkey. They are called “The higher you climb, the more aggressive we get, because we are hungry.” These monkeys will take anything from your hands if it appears to be food. So it’s best to just give it to them. I think they don’t like dogs. One nearly threw someone’s dog off of the mountain. I never experienced anything like that.

8. I visited Leshan. A location of one of the largest Buddha statues in China. It’s carved into the side of the mountain. I didn’t climb it but I took a boat around the water and got some pretty good photos. It’s huge and from another angle you can see what looks like a sleeping Buddha. Difficult to explain but cool to see.

9. I visited Dujiangyan. This is Sichuan’s famous irrigation system. It’s man made and natural. Responsible for guaranteeing crops and largely the reason why Chengdu is not submerged in water. Pretty Cool

10. Chinese New Year filled with food and Baijiu. Such a wonderful opportunity to experience true Chinese culture. I’m so grateful that I was welcomed as one of their own and fed as if I missed my birthday, Thanksgiving, and Christmas all together. I also drank like I missed my 21st birthday. Baijiu, that’s some strong stuff. Be careful. I visited a Light Lantern Show that is only available during Chinese New Year, interesting lanterns. Sparked a sudden craving in research.

1. I was fortunate to see first hand the values and the importance of family and friends that goes along with celebrating Chinese New Year

2. I have been able to learn about the history about Beijing and the dynasties through the locals here

3. I was able to spread a little bit of my family’s tradition around America’s holiday season and see how interested people here were.

4. I was able to grow my Beijing football team from 5 people to 50 people

5. I was finally introduced to the famous Beijing duck, which was pretty tasty

6. I was able to star in my first featured short film here, exploring my acting opportunity

7. I was able to explore all of Beijing historical sights; Great wall, forbidden city, Beijing Zoo, and the hutongs (the original city of beijing)

8. I was able to pick up the language and can communicate effectively now in the local dialect.