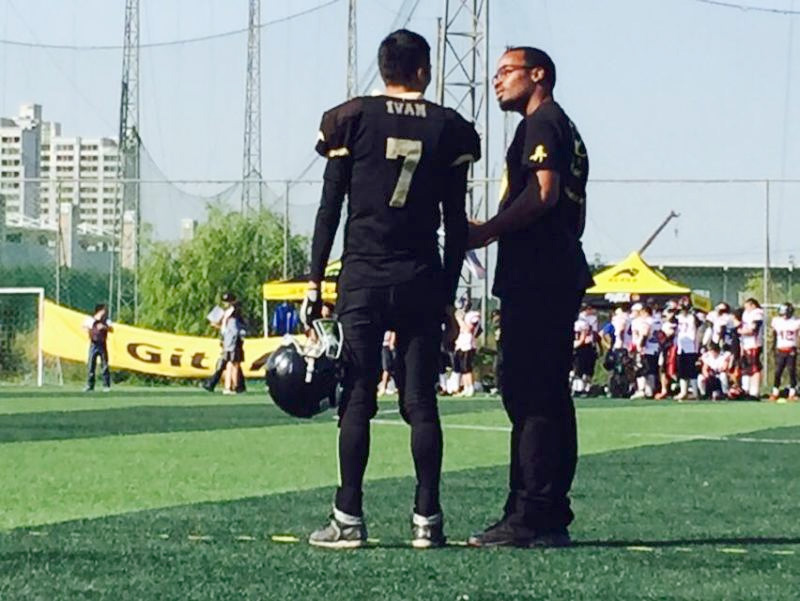 May 3, 2016 Marks the final day of the China Gridiron Leaders Foundation Fellowship for me. It will be the first day I’ve touched American soil in over 9 months. It will be a bittersweet experience because of expectations prior to coming to China and newer expectations that have developed. Be that as it may, in only 9 months I have so many experiences and I have been a little reluctant to reflect on just what has happened here in China. Being a GLF fellow and understanding the duties and responsibilities of a fellow was outlined pretty clearly. It could be simple as saying you have a team you are assigned to, a job placement, and you have Chinese class. Initially for me, it was as simple as that. Despite this thinking, it became so much more meaningful over time. It was so much more complex and enriching than I had originally imagined it would be.

When I arrived to Sichuan I was not prepared for what I would encounter. I imagined that American football in China would be just as established and organized as it is in the United States of America. I envisioned there would be some formal organizational structure that was established similar to other sports that are popular internationally. For example, soccer and basketball for the most part are world-recognized sports. From country to country from every stretch of earth soccer has managed to spread its popularity and even basketball has had its influence on the world.

Be that as it may, American football has not been as successful in terms of popularity in comparison to sports like basketball and soccer, resulting in all sorts of issues and challenges. As would be soon discovered, the emergence of similar issues of development with the team and city I was placed in put me in a very unordinary role.

This role was for some time undefined and had very ambiguous duties and obligations. I will say that all of them were essential to development of football as a whole in China and more importantly, to the development of my team the Chengdu Pandaman. All of the knowledge and necessities that were required were demanded and filtered through me as a fellow. Quickly, my role became more defined and more demanding. Everything from simple game tactics to recruiting techniques was requested. Practice structure, film purpose and usage, conditioning, discipline, and team policy changes all became a common thing.

I’m aware that all of these components are important and essential to building a well performing team. However, I was under the impression that these departments were already well established. We had a team, we had players, we started a season, and when I arrived we had already won a game. To my surprise, in the midst of the season, I was promoted to head coach. I have to admit that I originally didn’t expect to be taken seriously. My role in football has been nothing but a pawn up until this point in my life. Going from simply learning and playing the sport as a player, to quickly being one who has to teach it would seem at first like a dramatic shift in focus.

Teaching a sport and things related to that sport is quite different from simply playing and I’ve discovered this first hand from my own experiences with my team. Playing a sport provides you with the luxury of physically showing others exactly how to do something on the field. It also limited me in a sense that I was unaware of how blind I was to other positions on the field. I didn’t realize how much I didn’t know about a sport I had played my entire life.

Realizing this I quickly attempted to adjust my approach by learning more about football in order to relay this information back to my team. Constantly trying new methods, new tactics, and different things takes a lot of energy and effort out you. It makes you realize that when you are nearing the end how invested you have become in not only the sport, but the city, the team, the people, and more importantly the player’s success. It starts to show how much you have gotten attached through your enthusiasm and love of the game. Then, something happened that changed the meaning of everything and gave me a chance to redefine and be proud of the work of any I had done with my team.

The GLF Bowl, quickly gaining more and more attention became the climax point of the GLF fellowship. It began as a simple gentlemen’s agreement from one fellow to another that would play one another. This would serve the purpose of simply getting our teams some experience before the regular season started. Then it amplified, as it should have. It was the end of the fellowship and opportunity where we could put all of the pieces together.

Little lessons and big lessons all working together simultaneously in a game would be so vivid on this day. This was a game that garnered up enough support and attention that it couldn’t be anything less of a showdown. Friends were attending this game and some of which I could also call my family were planning on attending the game. People who you worked with and have been wondering where you have been spending all your time on the weekend and not being able to escape the demands of football. They would finally get a chance to understand why. People being introduced to the sport for the first time and could potentially be a future supporter. All of these people unknowingly had a steak in this game and were placing indirect pressure on both teams and their performances.

It became a showdown. It was a showdown not to let the world know who was the best coach or best team, but to really show the things that the teams have learned and what we have learned from them coaching. What we have done and what we were able to do with our teams. It became something that each team was fighting for but for different reasons.

My situation was a bit different from the other fellows. I had only been with one team the entire fellowship, so I was invested and seasoned unlike other fellows who had to spread their time with more than one team. I had experience with the league and playing games unlike a fellow who seemingly built his team from the bottom up. So in a sense, it was almost an obligation that my team had to win the game. If not for those reasons then it must be for all of these lessons, challenges, frustrations, experiences, tries and failures that went into coaching the Pandaman. Even if this was just my mindset, everyone was still heavily anticipating what they would see as a spectator of the game that day. They wanted to know just what this game was and why it was so meaningful.