Team and Board of Directors

Team and Board of Directors

Chris is the President and Co-Founder of Gridiron Leaders Foundation. He received his B.A. in History and Urban and Community Studies from the University of Michigan and his M.Sc. in Social Policy and Planning from the London School of Economics. Chris is a Humanity In Action Fellow, a William J. Fulbright Scholar, a Henry Luce Scholar, and Titmuss Meinhardt Memorial Fund Scholarship awardee. He has also worked in prestigious government internships at the United Kingdom House of Commons and the White House Domestic Policy Council. Currently, Chris is based in Chongqing and serves as a project manager at Liang Jiang Capital, a start-up and innovation incubator. Chris played Linebacker and Tight End for the Michigan Wolverine’s football team. 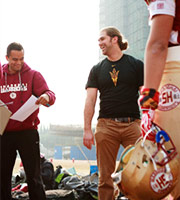 Zach is the Vice-President and Co-Founder of Gridiron Leaders Foundation. Zach received his B.S. in Supply Chain Management from Arizona State University’s W.P. Carey School of Business. Zach has over 5 years of international business experience including 3 years in senior management roles. He was a Trade Lane Executive at a Hong Kong based import/export company before transitioning into downstream focused operations in the China fulfillment market. Currently, Zach is based in Shanghai and serves as General Manager of iPai (Shanghai) Auction Company Ltd, a live and online surplus liquidation auction platform focused on the China consumer market. Zach played Defensive End for the Arizona State Sun Devils football team.

John serves as the Development Manager for Gridiron Leaders Foundation. He received his B.S. in Business Administration and Management with a concentration in Finance from Boston University and a bespoke MBA with a specialization in Challenges in Global Affairs from top institutions such as Stanford, UPENN, Colombia and Yale through Coursera, edX and NovaEd. He worked as an Analyst at WPP before transitioning to AllianceBernstein where he was an Assistant Vice President in the Private Banking division. Most recently he was Director of Asia-Pacific for GPM, a Global Precious Metals brokerage firm, where he successfully launched the firms first Asia-Pacific office in Hong Kong while leading strategic planning efforts across the region, with a particular focus on business development in Hong Kong and China. Currently, John is based in Hong Kong with his wife and son where he is an Advisory Board Member of Soap Cycling, Ltd as well as a Founding Member and Head Coach of the Hong Kong Cobras Football Club.

Dan Redford serves as the Alumni Association and Internship Coordinator for Gridiron Leaders Foundation. A Michigan native, Dan is a proud Michigan State Spartan where he graduated with his B.A in Chinese and International Relations. His first came to China was through a study abroad exchange program between MSU and Nankai University in Tianjin in 2008, and has been involved in U.S. – China programs and business development ever since. After serving as a student ambassador at the 2010 Shanghai World Expo, Dan served as the program manager for “Chinatown,” a student housing project near his alma mater, later relocating to Beijing where he currently resides. Dan has worked extensively to drive investment to the United States from China through the EB-5 program, helping Chinese citizens invest and obtain permanent residency in the United States. Since 2012, he has served as the President of the Michigan State University Beijing Alumni Club, and continues to work with Chinese students and alumni of U.S. universities. Though Dan was not built to be a football player, he has a strong passion for the game and is a life-long football aficionado.

Mr. Heleniak has been Senior Advisor to Morgan Stanley since May 2009, having joined the firm as its Vice Chairman in 2005. Before joining Morgan Stanley, Mr. Heleniak spent his entire career, save for a stint in government, at the law firm of Shearman & Sterling LLP in both New York and Hong Kong, where he rose to Senior Partner (CEO). His strategic contributions to global business diplomacy include the management of China’s first major joint venture with a Western corporation, as well as service at the U.S. Department of the Treasury from 1977-1979, first as Executive Assistant to the Deputy Secretary of the Treasury and then as Assistant General Counsel (Domestic Finance) of the Treasury.

An instructor of Economics at the University of Wisconsin-Eau Claire from 1969 to 1971, Mr. Heleniak has been active in education in a number of advisory capacities, including President Obama’s education policy committee during the 2008 election. Mr. Heleniak serves as Chairman of the Council for the United States and Italy in the continued development of positive relations between the two countries. In addition to serving on the board of the Gridiron Leaders Foundation, Mr. Heleniak serves on the board or in leading philanthropic roles for The New York City Partnership, The New York City Ballet, The Japan Society and other vital organizations. Mr. Heleniak graduated with an A.B. from the University of Michigan. He received a MS in Economics from the London School of Economics and a JD from Columbia Law School. In May 2010, Mr. Heleniak was honored at One To World’s annual Fulbright Awards Dinner.

Mr. Edwards serves as Managing Partner of Shearman & Sterling LLP’s Beijing office as head of the China Mergers & Acquisitions practice. With over 20 years of China business experience, Mr. Edwards has represented Chinese and international corporations in going private, tender offers, stock asset purchase transitions, venture capital, and private equity transitions. In addition to serving on the board of the Gridiron Leaders Foundation, Mr. Edwards is a board member of the Beijing Charity Organization and co-owner of the Boston Breakers Professional Women’s soccer team. Mr. Edwards received his BA and JD from Columbia University.

Xu Jiansheng, or Ron (LL.B., Xiamen University; LL.M., University of Michigan), is a founding partner of Sphere Logic Partners (SLP), a leading regional PRC law firm which delivers a wide range of corporate and commercial legal services to clients from around the world. Heading the firm’s international and intellectual property practices, Ron has extensive experience in advising foreign investors and businesses regarding their legal and commercial interests in China and he is also an expert in representing Chinese entities in their transnational legal matters. He has represented an array of multinational and leading companies in various industries, including aerospace and aviation, infrastructure, marine equipment groups, automotive, financial institutions, high technology, consumer electronics, medical, agriculture, retail, luxury goods, food & drink, apparel & footwear, power tools and hardware & home improvement.

In addition, Ron serves as the Asia Pacific Regional Representative on the Executive Committee of Lawyers Associated Worldwide, a global association of over 100 independent law firms located in more than 180 major commercial centers throughout the world. Ron is also a member of the All China Lawyers Association Intellectual Property Committee, the director of both Fujian (Provincial) and Xiamen (Municipal) Lawyers Association Intellectual Property Committees, and a member of China Ministry of Commerce’s Center for Legal Aid to Enterprises in Overseas IP Protection. Penning the Intellectual Property chapter, he is the co-author of the soon-to-be-published International Business Law, a Chinese legal text book written by Chinese in English language and the first book of its type in China.

Besides practicing law, Ron regularly advises and assists Chinese companies, local government and semi-government agencies and industrial associations in the initiation, facilitation, development, and implementation of their international strategies and business plans. Among other roles, he is a director of Jade Investment Management Limited, a company dedicated to helping Chinese SMEs in cross-border financing. He is particularly active in advising, training and facilitating transactions for Chinese innovation companies seeking global expansion or enhancement or optimization of their business or intangible portfolio.

C. Peter Theut is the Founder of GBN, a key member of GBN’s Management Team and Chairman of the Board. Theut founded Global Bridges Network after a distinguished career with a major law firm where he chaired the firm’s Global Trade and Transaction Practice, the firm’s China Initiative and served as a member of the Executive Committee of the China Alliance. Theut has earned a reputation for negotiating and documenting complex international-related transactions, providing counsel with respect to capital structure, operating control, governance and related issues. Theut works regularly with companies currently doing business in China and elsewhere worldwide or having a strategic interest in expanding into China or other global markets. Theut also has extensive experience with European, Chinese, Japanese and other Asia countries investing in or otherwise entering worldwide markets and particularly markets in the United States.

Theut also is the Co-Founder of Global Community Outreach (“Outreach”), a nonprofit organization, also headquartered in Ann Arbor. Outreach functions in collaboration with various Non-Governmental Organizations worldwide to provide humanitarian assistance to remote parts of the world, with particular focus on remote parts of Africa, China and Mexico.

Mr. Theut serves on the Advisory Boards of the University of Michigan’s Confucius Institute, the Detroit China Business Association, the Wayne State Law School International Law Program and the Board of Visitors of the Wayne State University College of Liberal Arts and Science. Theut authored the chapter “Practical Considerations for Doing Business in China” in the Aspatore publication, “Best Practices for International Transactions in China”.